Millions of people around the world play basketball, yet very few play it on a professional level and even fewer make it to the best professional basketball league on the planet, the NBA. Getting to the NBA is extremely difficult even for talented players and those who wish to make it to the top must be prepared to face the fact that they may never fulfill their dream. Still, becoming an NBA pro is not impossible, especially for those who meet just a few simple requirements.

Obviously, they need to be excellent players with adept skills and impeccable work ethics combined with some fantastic genetics. So, how hard could it actually be to make it to the NBA? The team at SuperCasinoSites decided to delve into the endless sea of sports stats and the latest research to calculate the odds of becoming an NBA player. 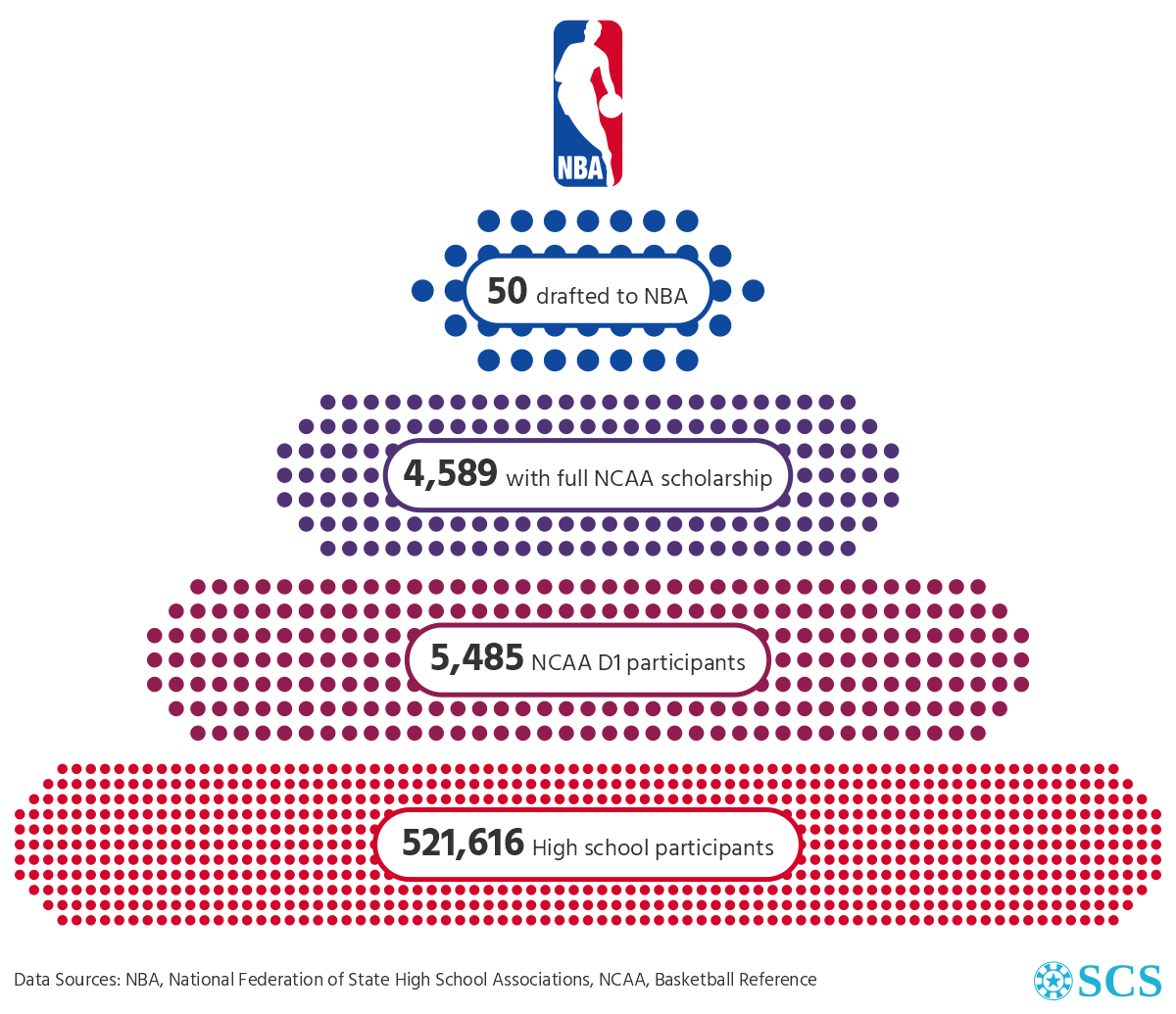 Everyone knows that getting to the NBA is hard and having talent is just not enough – you have to be extraordinarily good and have a comparative advantage at one or more specific stats such as scoring at least 20 points per game. Physical strength, speed, agility, and size are also key elements that determine whether you will ever become a high-level player. Huge factors are, of course, height and weight and interestingly, the average height of NBA players has fluctuated a lot over the past few decades.

Most professional basketball players demonstrate their special talent before college – either early in high school or even in middle school. So what can tip the odds is whether you have played basketball in school and, then, in college. The vast majority of newly drafted players come from Division I athletics. And this is where raw data shows how tough it really is to make it to the NBA.

Roughly 500,000 boys play basketball in school at any given time in the U.S. According to data from the National Federation of State High School Associations, 521,616 boys competed in basketball games in the 2021-2022 school year. At the same time, there were 18,179 male basketball players competing in all 3 divisions of the National Collegiate Athletic Association (NCAA) for 2020-2021 (the latest data available). Those in Division I, who are most likely to be drafted officially, were 5,485 – 4,589 of them with a full scholarship. As participation rates for both school and collegiate sports remain quite steady each year, we can calculate that roughly 3.5% of high school players will participate in the sport at a collegiate and university level. And 1.05% of high schoolers who play basketball would move on to Division I.

From there, players can be drafted in the club rosters, considering they meet several basic requirements such as being at least 19 years old during the calendar year of the draft. In 2021, there were 60 available slots at the NBA annual draft and 50 of the picks were from NCAA teams – 3 players came from NBA’s own G League Ignite while 7 were international players. This means that less than 1% (0.91%) of college players made it to the NBA draft – the percentage rises to 1.09% if we consider only those with full scholarships.
Of course, some NBA players have never been officially drafted and others have never been to college. In conclusion, we could say that around 0.01% of those who play basketball in high school would make it to the NBA – that is 1 in 10,000.

Since all players in the NBA are required to have finished high school at least one year before being accepted in the pro league, high schoolers have an entire year to themselves after graduation. And while some of them go overseas to start playing professionally right away, most actually choose to stay home and spend at least one year in college. Unlike most of the world, college and university teams in the U.S. receive a lot of funding and are able to provide excellent training programs for their students.

Of course, certain colleges have long traditions in one or more sports, including basketball, football, and baseball and historically, they have produced more professional athletes than others. When it comes to professional basketball, several college teams are largely responsible for developing the talent and skills of NBA stars. Looking at the current team rosters, we can see that the top colleges for NBA players are Kentucky and Duke – 29 players came from Kentucky Wildcats and another 28 played for the Blue Devils.

Being born in a certain place can increase your chances of becoming a professional basketball player. Obviously, if you were born in the U.S., you are much more likely to make it to the top league in this sport. But which cities produce the most NBA players? Let’s take a look at the latest draft, the 2022 class. It’s easy to see that the only two American cities represented with more than one player are Detroit and Minneapolis. The French capital of Paris also has two athletes who were picked during the 2022 draft.